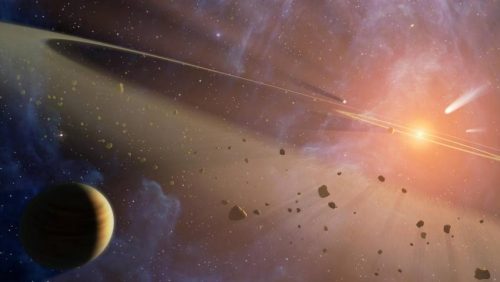 Kennedy Space Center, Florida, United States, November 10, 2020 / TRAVELINDEX / The prospects of a robotic manufacturing base operating off Earth is not as far-fetched an idea as it used to be, according to a study published by a team of researchers led by a physicist at NASA’s Kennedy Space Center in Florida.

• Currently maybe for sale, the one and only global space domain name, madeinspace.com – enquire here…

Advances in robotics and remote manufacturing in the form of 3-D printing offer some tantalizing prospects for future designers to consider as they map out the ways to explore and use resources in the solar system. Also, private companies are establishing goals and abilities to use resources available near Earth.

In their study, Phil Metzger and James Mantovani of Kennedy’s Granular Mechanics and Regolith Operations Laboratory; Anthony Muscatello of the center’s Applied Chemistry Laboratory; and Robert Mueller of the Kennedy Surface Systems Office, detail one potential path toward developing a self-sustaining, space-based industry that would use resources from asteroids and other celestial bodies to meet the needs of Earth.

A fully functioning, remote system of robotic excavators and simple machinery still is years away from reality, and much research on asteroids needs to be undertaken. The building blocks of a successful system, however, appear to be in place, the study concluded.

“Robots and machines would just make the metal and propellants for starters,” Metzger said. “The first generation of robots makes the second generation of hardware, except the comparatively lightweight electronics and motors that have to be sent up from Earth. It doesn’t matter how much the large structures weigh because you didn’t have to launch it.”

The study was undertaken in part because companies on Earth are quickly building business cases for pathfinding missions to evaluate available resources in the solar system with an eye on collecting them.

“They’re going to explore what works and what doesn’t work,” Metzger said.

Metzger said the researchers developed a basic computer model to judge the viability of what would be possible. Their data showed six generations of development to “close the loop,” meaning robots and automated machines would be able to build and operate themselves without any materials from Earth. Basically, they found that prospect was not as daunting as they thought it would be.

Because asteroids are loaded with minerals that are rare on Earth, near-Earth asteroids and the asteroid belt could become the mining centers for remotely-operated excavators and processing machinery. In the future, an industry could develop to send refined materials, rare metals and even free, clean energy to Earth from asteroids and other bodies.

• Currently maybe for sale, the one and only global space domain name, madeinspace.com – enquire here…

“Now that we know we can get carbon in space, the basic elements that we need for industry are all within reach,” Metzger said. “That was game-changing for us. The asteroid belt has a billion times more platinum than is found on Earth. There is literally a billion times the metal that is on Earth, and all the water you could ever need.”

Another critical technology also is developing at just the right time: 3-D printers producing hardware that can be assembled into ever-more-complex machinery and potentially in the future, increasingly capable robots.

“The idea is you start with resources out of Earth’s gravity well in the vicinity of the Earth,” Metzger said. “But what we argued is that you can establish industry in space for a surprisingly low cost, much less than anybody previously thought.”

The finished minerals could be returned to Earth or used in space to build new machinery or as supplies for astronauts as they explore the solar system.

So where to start?

As part of NASA’s recently announced asteroid initiative, the agency is searching for a small asteroid that can be moved into a path within the Earth-moon system so astronauts can visit it as early as 2021 to take samples of the space rock.

“There are some types of asteroids that would be fantastic for space resources,” Metzger said. “It’s primordial solar system material. You can make plastics and you can make rubber by combining the carbon and the hydrogen.”

A near-Earth asteroid or other nearby body presumably could contain enough material to allow a robotic system to mine the resources and refine them into usable metal or other substances. Those materials could be formed into pieces and assembled into another robot system that would itself build similar models and advance the design.

The first-generation machinery would be akin to the simple mechanical devices of the 1700s, with each new generation advancing quickly to the modern vanguard of abilities. They would start with gas production and the creation of solar cells, vital for providing a power source.

Each new robot could add improvements to each successive model and quickly advance the mining and manufacturing capabilities. It would not take long for the miners to produce more material than they need for themselves, and they could start shipping precious metals back to Earth.

Perhaps the most unusual aspect of the whole endeavor, the article argues, is that it would not take many launches from Earth to achieve. Launch costs would be saved because robots building themselves in space from material gathered there wouldn’t need anything produced by people. Very quickly, only the computer chips, electronics boards and wiring would need to come from Earth.

“We took it through six generations of robotic development and you can achieve full closure and make everything in space,” Metzger said. “We showed you can get it down to launching 12 tons of hardware, which is incredibly small.”

The team’s paper titled, “Affordable, Rapid Bootstrapping of the Space Industry and Solar System Civilization,” is published in the June issue of the Journal of Aerospace Engineering.